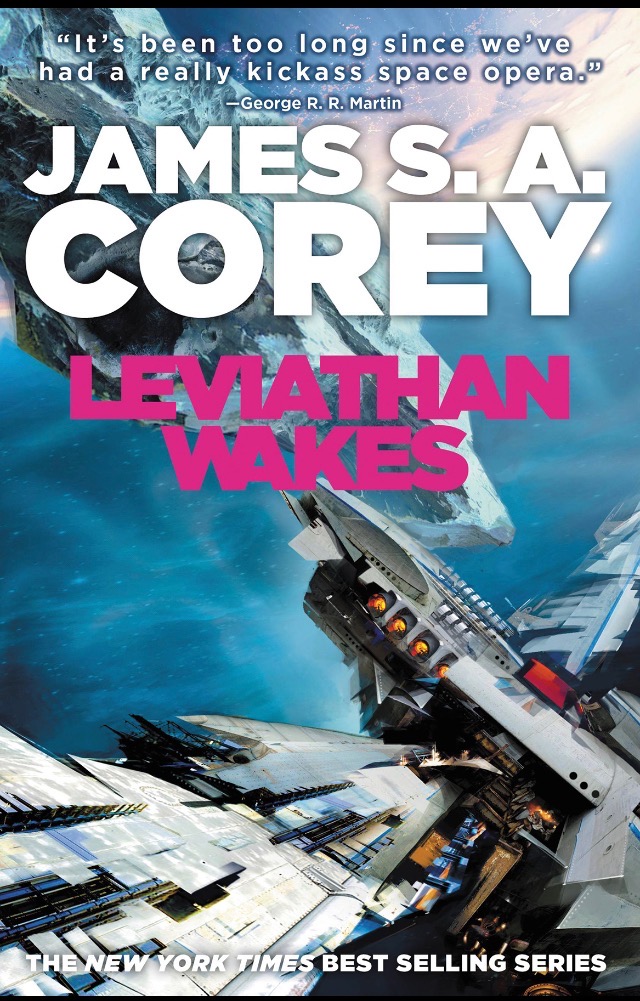 Leviathan Wakes is the first entry in The Expanse space opera series written by the two-man writing team known as James S.A. Corey.

The series contains eight novels and several connected novellas. The television series covers (roughly) the first five novels,and benefits from an excellent cast that feels true to the books. I didn’t care for the television show when I first saw it, but I loved the books, and I felt the later seasons of the show were quite good.

In this post I’m re-reading Leviathan Wakes to better understand how it was put together.

Thoughts on Point of View

Corey uses a brief prologue to tease the central mystery, then he takes the view omniscient, laying in basic facts about his universe.

A hundred and fifty years before, when the parochial disagreements between Earth and Mars had been on the verge of war, the Belt had been a far horizon of tremendous mineral wealth beyond viable economic reach, and the outer planets had been beyond even the most unrealistic corporate dream. Then Solomon Epstein had built his little modified fusion drive, popped it on the back of his three-man yacht, and turned it on.

From there, he tightens his view to a specific ship and their task. Finally, he lands on one man, his main character.

So now the Canterbury and her dozens of sister ships in the Pur’n’Kleen Water Company made the loop from Saturn’s generous rings to the Belt and back hauling glaciers, and would until the ships aged into salvage wrecks.

Jim Holden saw some poetry in that.

This is well done. The omniscient camera moves in and out, giving us a grasp of things in just a few pages. The movement is smooth unless we hit a chapter break.

This strikes me as a skillful way to avoid infodumping.

At the central lift, Holden held his finger briefly over the button for the navigation deck, tempted by the prospect of Ade Tukunbo—her smile, her voice, the patchouli-and-vanilla scent she used in her hair—but pressed the button for the infirmary instead. Duty before pleasure.

With characterization there’s a temptation to only show or only tell. Corey splits the difference.

This is a power move. Corey lets action do most of the talking, then he swoops in with a short sentence to ensure we’re drawing the right conclusion in understanding Holden. It works!

Here’s another character summation; this one is much more tell than show.

Havelock laughed. He could take being teased and keep on moving. It was what made him good at team sports: soccer, basketball, politics.

But let’s look at that passage in context:

Havelock laughed. He could take being teased and keep on moving. It was what made him good at team sports: soccer, basketball, politics.

Miller wasn’t much good at those.

This is a dense stack of information. There’s the quick summation of Havelock, a minor character, which is used as contrast to shed light on Miller, a major character.

Corey doesn’t sum Miller up in one go like he did with Havelock. Which makes sense, as learning about major characters can and should happen more slowly. Miller gets a lot of air time.

In this chapter, Corey sets the scene and waits for characters to speak before shifting to wide omniscient and describing the setting. This variation in where the narrator shows up removes the “voice of God” problem omniscient can create when a booming narrator takes the reins at the start of too many chapters.

Here’s a bit of narration:

Spinning it up to 0.3 g had taken the best minds at Tycho Manufacturing half a generation, and they were still pretty smug about it.

The omniscient narrator has opinions, apparently, but it seems to be sticking to generally accepted knowledge.

Below, the narrator shares Miller’s opinion without Miller needing to have that thought right then. Omniscient truly is different than third person limited!

She wore her uniform casually, her hair down around her shoulders in violation of corporate regulations. If Miller had ever been called upon to describe her, the phrase deceptive coloration would have figured in. She nodded to a chair, and he sat.

Here, we learn about OPA in the context of what it means to cops on Ceres:

An advance by the Outer Planets Alliance was the constant bogeyman of Ceres security. Living in the tradition of…

The narrator jumps in and explains the context as needed, keeping it specific to the moment. This avoids the “As you know, Bob…” situation where characters start explaining things for no reason. It also gives readers time to absorb the knowledge in pieces, which is helpful, because there’s so much good worldbuilding here.

My ‘book notes’ are appreciation posts written to help me better understand what is working well in a piece of fiction. I may update these posts several times while I’m reading a story. This is not a book review.