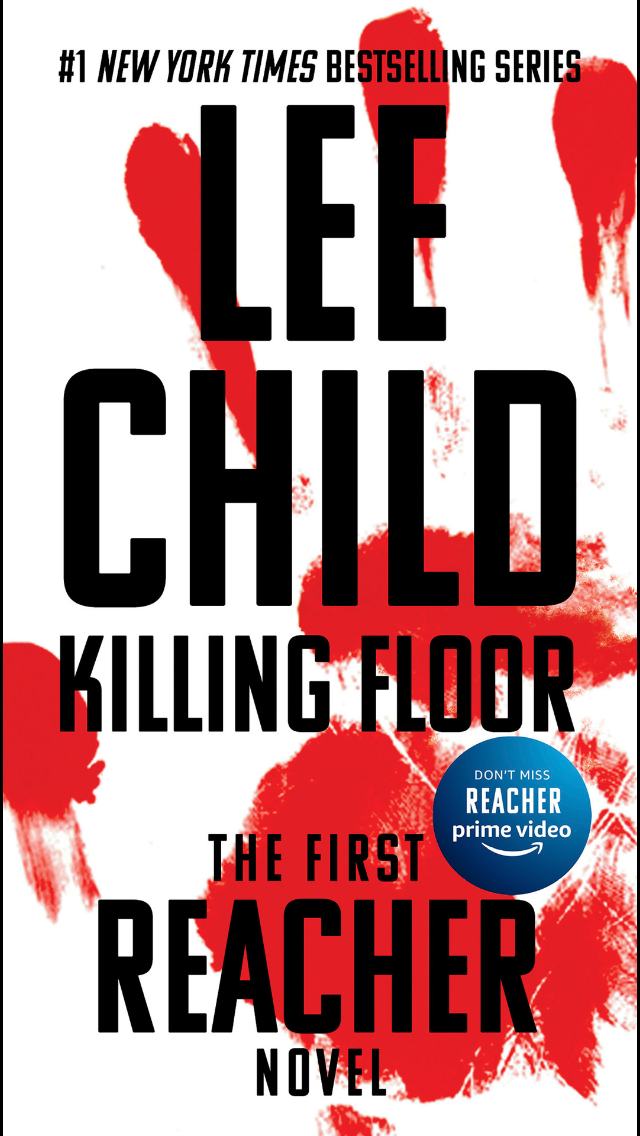 The Killing Floor is the first entry in the bestselling Jack Reacher thriller series. I recently gave it a go, curious to see what makes audiences love it.

The first thing I noticed was the practicality of Child’s prose. He gets right down to business.

I WAS ARRESTED IN ENO’S DINER. AT TWELVE O’CLOCK. I was eating eggs and drinking coffee. A late breakfast, not lunch. I was wet and tired after a long walk in heavy rain. All the way from the highway to the edge of town. The diner was small, but bright and clean. Brand-new, built to resemble a converted railroad car. Narrow, with a long lunch counter on one side and a kitchen bumped out back. Booths lining the opposite wall. A doorway where the center booth would be.

I HEARD RAISED VOICES IN THE ROSEWOOD OFFICE IN BACK. The tenor of argument. The slap of a palm on a desk. The door opened and Stevenson walked out with Chief Morrison. Stevenson looked mad. He strode down the side of the open area. His neck was rigid with fury.

There were so many short sentences! Pages and pages of them. After a while, it felt like being hammered.

Finlay was at the desk. The tape recorder was there. The stiff cords trailed. The air was still and cool. Finlay looked harassed. His tie was pulled down.

Occasionally, the description becomes less clinical, and that provided some relief.

We stepped in through the out door. The foul odor of prison hit me. The night exhalation of countless dispirited men. It was nearly pitch black. A night-light glowed dimly. I sensed rather than saw rows of cells. I heard the babble of night sounds. Breathing and snoring. Muttering and whimpering.

Reacher fits a certain archetype: the rugged individualist, a man capable of killing with great skill, and who has total independence. He is frustrated with the government, rootless, cynical, and smarter than almost everyone around him.

I told him no, I enjoyed it. I told him I appreciated the solitude, the anonymity. Like I was invisible. “How do you mean, invisible?” he said. He seemed interested. “I travel by road,” I said. “Always by road. Walk a bit, and ride the buses. Sometimes trains. Always pay cash. That way there’s never a paper trail. No credit card transactions, no passenger manifests, nothing. Nobody could trace me. I never tell anybody my name.

I put the book down at the 1/3rd mark and read the plot summary on Wikipedia.

The sheer volume of description and simple sentences made this a monotonous read for me. The pace felt super slow, I never connected with the protagonist (if anything, I disliked him) and the extreme descriptions of violence squicked me out. I’m not opposed to violence in stories, but the sexual assault descriptions were enough to put me off this series forever. There are certain types of imagery I’d rather not have in my head.

It’s fair to say that Jack Reacher falls into the “not for me” category. 🙂

At the same time, I think Child’s use of “telling details” is worth emulating. Sentence fragments and short, simple descriptors can be nice and punchy when setting a scene.

My ‘book notes’ are appreciation posts written to help me better understand what is working well in a piece of fiction. I may update these posts several times while I’m reading a story. This is not a book review.